Hillel: The Upstander: An Evening with Max Glauben & Jori Epstein 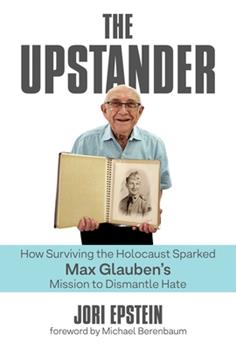 To commemorate Yom HaShoah, Holocaust Remembrance Day, join Texas Hillel & Northwestern Hillel for a conversation with Holocaust survivor Max Glauben and Jori Epstein. They will discuss the journey of writing Max’s new memoir, The Upstander, which released March 30. Max and Jori have collaborated for the last five years to further Max’s mission to outlast hate, preserve memory and compel the world to embrace tolerance. This event will be student-moderated with the opportunity for attendees to submit questions.

Please register here for the Zoom Webinar at this link.

The registration will allow you to receive the link. We will send reminders to all who RSVP leading up to the event to register through that Zoom link.

93-year-old Holocaust survivor Max Glauben is recognized across Texas and the nation as a passionate advocate for Holocaust and human rights education. Max was born in Warsaw, Poland in 1928. During the 1943 Warsaw Ghetto uprising, Max and his family were discovered and deported to Majdanek. On arrival, his mother and younger brother were sent to the gas chamber. Max and his father were transferred to the Budzyn labor camp, where his father was soon murdered. Orphaned, Max was transferred to Mielec, Wieliczka, Plaszow, Flossenburg and then sent on a death march to Dachau. During this march, he was liberated by a segment of Gen. George Patton’s 3rd Army on April 23, 1945. An American lieutenant took Max under his wing until his immigration to the United States. Max served in the U.S. Army 1951-53. He and his wife Frieda were married on June 14, 1953. They have three children, seven grandchildren, and three great-grandchildren. With 30 other survivors in Dallas, Max helped start the movement that led to the creation of the Dallas Holocaust and Human Rights Museum.

Jori Epstein is a sports reporter for USA TODAY and the author of The Upstander. At USA TODAY, she reports features, investigations, and news—primarily on the Dallas Cowboys and NFL. She worked previously for The Dallas Morning News and Sports Illustrated. Jori graduated from the University of Texas in 2016 with degrees in journalism and Plan II Honors.

Infused with raw emotion and vivid detail, historical records and Max Glauben’s poignant voice, The Upstander: How Surviving the Holocaust Sparked Max Glauben’s Mission to Dismantle Hate relays the true story of the harrowing violence and dehumanization Max endured during the Holocaust. It relays Max’s powerful lifetime commitment to actively thwarting hate and galvanizing resilience. Max insists you, too, can transform your adversity into your greatest strength.

AJFF: Q&A with Oren Rosenfeld, director of Hummus! The Movie