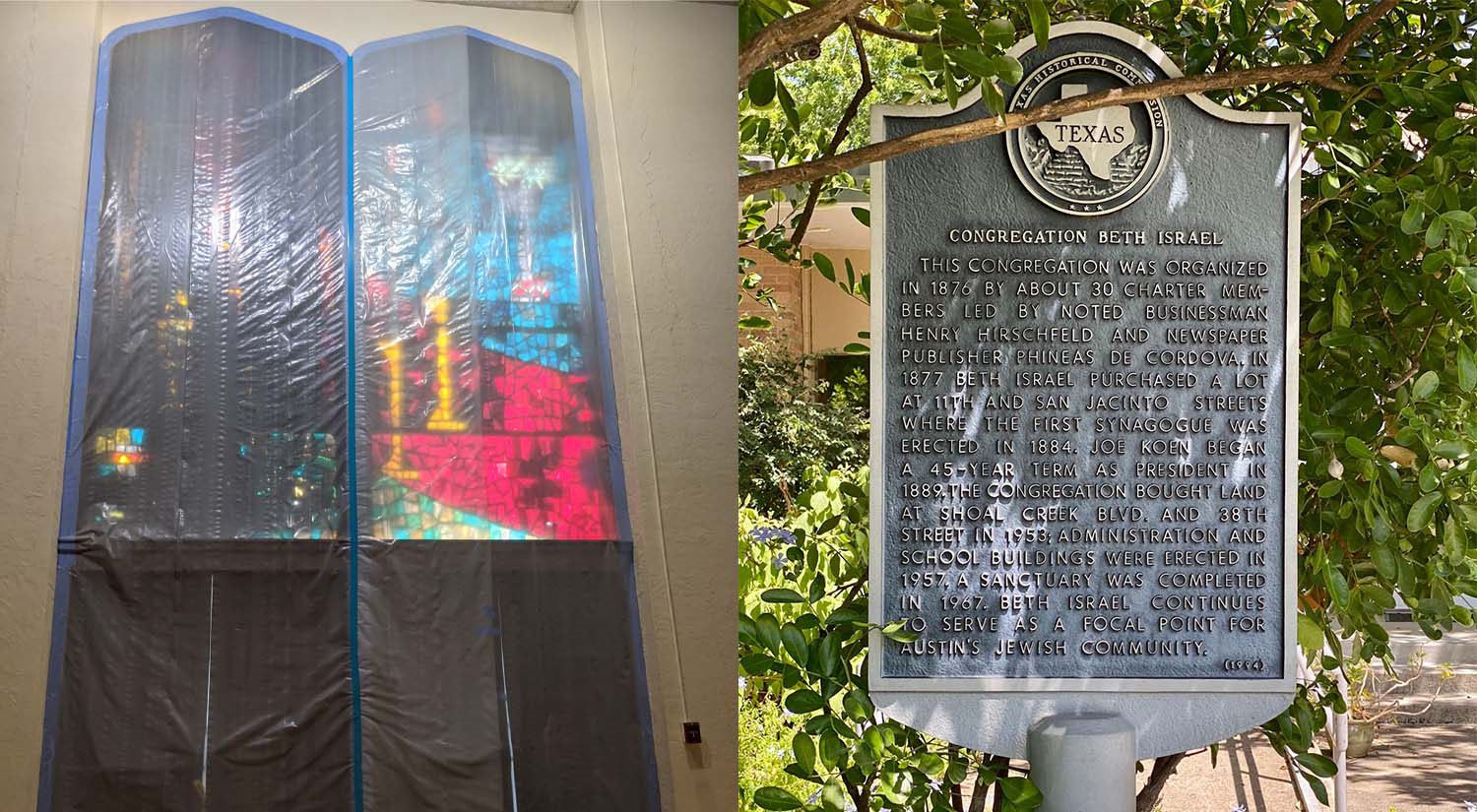 The Jewish people have always been resilient. For centuries, they have endured hardships, oppression, antisemitism, and pain, yet they continue to stand proudly as Jews. “We hoped and prayed that, at this point in history, we would have moved past the suffering. But nearly one year ago, after weeks of disturbing protests in our community, acts of vandalism, and an overabundance of stickers and fliers proclaiming terrible anti-Jewish rhetoric, an 18-year-old set our sanctuary doors on fire,” said Rabbi Kelly Levy. The fire destroyed the synagogue’s carved wooden doors, severely damaged the stained glass windows and caused tremendous smoke damage in the sanctuary.

In November 2021, the suspect was charged for the arson and the case is currently pending. “It gives us some sense of relief to learn of this arrest, but we are staying vigilant. Across Central Texas and beyond, we are seeing a spike in attacks against Jews,” said Rabbi Steven Folberg upon learning about the suspect’s arrest.

Congregation Beth Israel is the oldest reform congregation in Central Texas, founded in 1876 and chartered by the state of Texas in 1879. The fire set on October 31, 2021, was a hate crime against the congregation and the Jewish community. Thanks to a passerby who saw the fire and called the Austin Fire Department, the fire was swiftly extinguished before even more damage could be wrought. Faith leaders of Austin showed support of the Jewish community after the fire, and donations came in from all over the world, but CBI clergy and leaders say there is still much work to be done to reconstruct the sanctuary due to smoke damage and deferred maintenance to the building.

“While our sanctuary has been permanently closed until further notice, our community continues to show up. We come together to pray, to learn, to celebrate holidays and joyful events. Our sacred prayer space may be unusable, but our faith and commitment to community remains strong,” said CBI President Lori Adelman. With that in mind, nearly one year later, CBI continues to make some changes and projects they will need to do so for years to come.

In 2021, the congregation held its Passover seder at a private location. In addition, CBI’s Brotherhood and Sisterhood have adjusted annual programming, with some fundraising and community building opportunities being held offsite or even canceled.

This year’s High Holy Days, once again, present a challenge to a congregation without a sanctuary. CBI clergy and leadership says they are grateful to have friends within the multi-faith community of Austin which helped them secure a worship space large enough for the majority of the CBI community to attend services. “Our deepest

appreciation and gratitude go to iACT for reaching out to its members to help us find space and St. Matthew’s Episcopal Church,” said Rabbi Levy. “While we are grateful to have the opportunity to be physically together for Rosh Hashanah and Yom Kippur for the first time since 2019, the grief of not being in our beloved building remains. We also know that the space will not be large enough to welcome all who have attended our services in the past, so we will sadly limit admittance to those who hold a current membership.” To accommodate everyone who wants to participate but can’t be physically present, CBI will stream the worship services for others who wish to join us.

“The need to rebuild continues to be at the forefront of the hearts and minds of the congregation,” said Adelman. The continued efforts to rebuild from a tragic, expensive loss inspired one of CBI’s cherished congregants, Sue Bilich, to come up with a plan to raise some of the necessary funds needed for the renovation. What is more, it was an idea that doubled as a way to celebrate and showcase the wonder and joy of the community. Bilich planted the seed and now, together with other volunteers and community members, CBI is putting on a musical titled, “The Little Things You Do Together” on Saturday, September 10. The title of this event is a song by Stephen Sondheim, the brilliant lyricist and composer of COMPANY, and a multitude of other stories set to music.

CBI is inviting the community to attend the performance directed by Austin Musical Theater director, Adam Roberts. The cast includes clergy of Congregation Beth Israel, along with seasoned performers Katherine Altobello, Sue Bilich, Tim O’Brien, Jeffrey Jones Regona, and Gil Zilkha. In addition to the paid admission to the performance, tickets include a wine and cheese reception for those attending in person. For more information, visit bethisrael.org/sondheim.