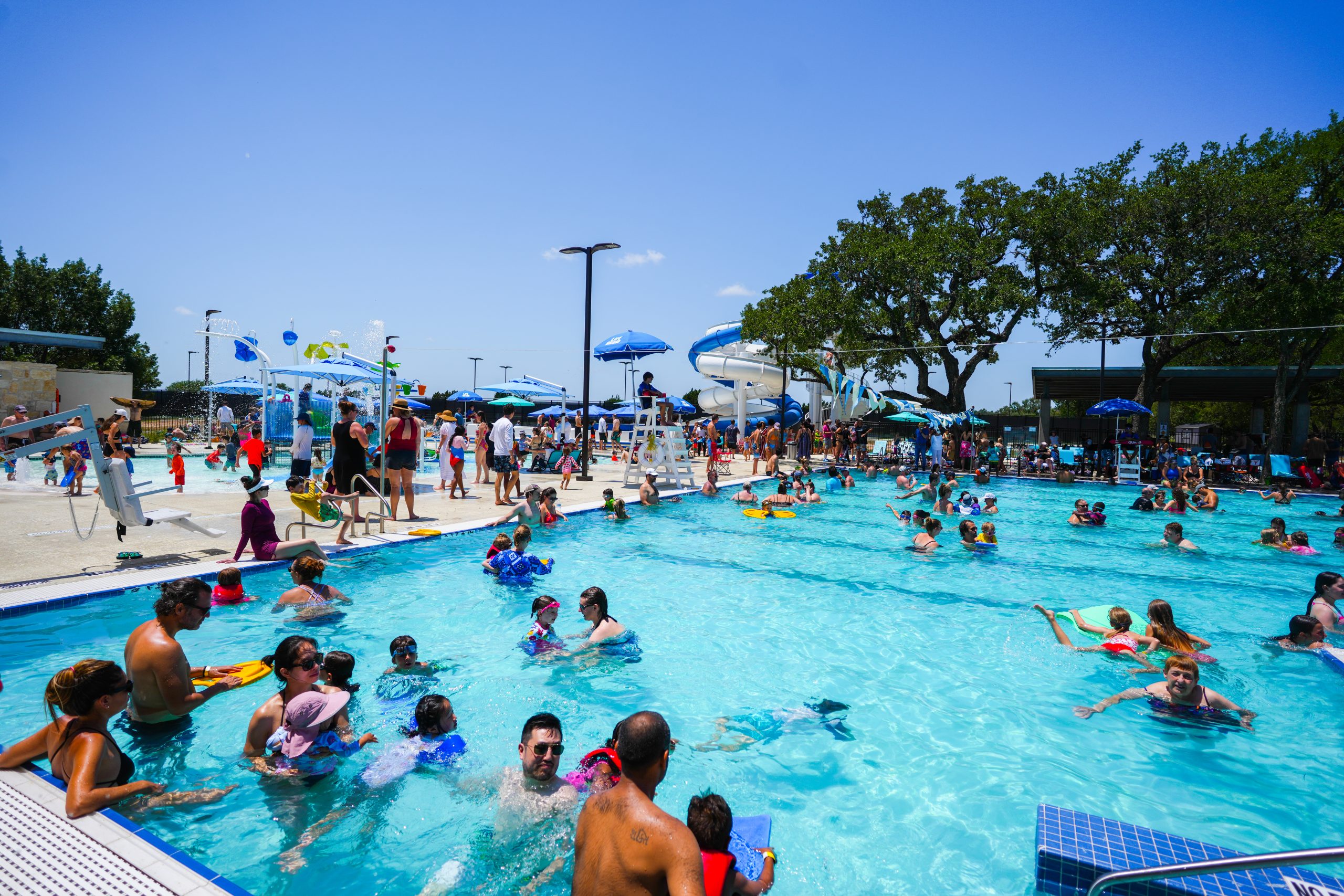 On May 29, the Shalom Austin Jewish Community Center welcomed hundreds of people to jump into the new 25-yard Lisa and Sandy Gottesman Pool at the Rochelle and Stanley Ferdman Family Aquatic Center and rally on the courts at the new Hurt Family Tennis Center. Along with access to the new state-of-the art locker rooms, children’s activity pool, concession stand and a trip down the water slide, members and guests of all ages were able to experience the Generations project come to life.

The event was open to the entire community, both members and “not yet” members. Activities included swimming, pool basketball, sliding down water slides and cardio tennis and pickleball games. The excitement amplified every time a prize winner was announced. Prizes included free personal training sessions, tennis lessons, J Bucks, free J memberships and more. Everyone left a winner, having made memories under the Texas sun on a beautiful day.

“It was such a pleasure to welcome new and familiar faces that day,” said JCC Member Experience Director, Dana Makeover. “Everything felt so alive; and it was a much needed new beginning. Even with the activity of the event, and after these past couple of very challenging years, there is a sense of togetherness and ease as you enter the JCC.”

Splash & Serve Marks a New Day at the J

The smell of sunscreen and the sound of families enjoying themselves set the stage at the Splash & Serve event. Members and guests gasped with excitement as they entered the renovated aquatic center for the first time. As long-time J member Carol Dochen said, “Wow! I have never seen this many people here in my entire life. This is what we have been dreaming about- serving so many people. What a great place to make new lifelong friends, that’s what we’ve done through our associ­ation at the J.”

“We were overwhelmed by the 1,000 plus community members that shared in the celebration with us at Splash & Serve,” said Senior Health and Wellness Director, Mark Pattis. “I am proud of the cross-depart­mental participation of our staff volunteers who helped to create an unforgettable day.”

J member Michael Grossman, M.D. relaxed in the new pool area while his wife played tennis. As the grandfather of 15 grandchildren, he knows the importance of family-friendly facilities. “This is a fantastic improvement for the future generations to use and enjoy,” said Grossman.

It wasn’t only members who were amazed by the completed project. Shalom Austin Chief Operating Officer Janet S. Elam was involved in the project every step of the way. Even having seen archi­tectural renderings and the construction process, nothing could prepare her for the first day members entered the facility. “As excited as I knew I would be when we opened the aquatic and tennis centers, it pales in comparison to how exciting it was to actually see our vision come to life and all families and individuals enjoying themselves at the J.”

Shantel and David Ferdman first became involved with the Shalom Austin JCC in 1999. Since day one, they have remained dedicated to the J and the community it serves. Arriving at Splash & Serve immedi­ately after landing at Austin–Bergstrom International Airport, Shantel and David both exclaimed they wouldn’t have missed it for the world. 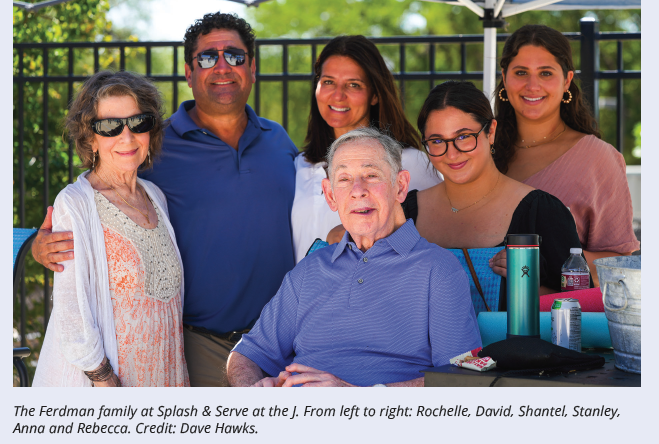 David was active on the project every step of the way and worked with nearly every department at Shalom Austin for over a decade. His father, Stanley Ferdman said he could tell the project gave David a lot of nachas, the Yiddish word for a feeling of unbridled gratification.

“The greatest challenge of the project was ensuring the space would meet the needs of all the constituents in a small space,” David said. As he scanned the aquatic center and looked at the line of people waiting to go down the water slide, children splashing under the dumping buckets, swimmers in the lap lanes and families together under the ample shade seating, he smiled and said, “and the greatest accomplishment was doing just that!” David credits the incred­ible Shalom Austin staff for helping and said he enjoyed working with all of them.

During the planning phase, no detail was left unconsidered. Shantel, mother of three, reflected on the old children’s pool and the difficulty getting down the steps into the water with a child in her arms. “I wanted this pool to have a walk-in entry to make it easier for parents and children to enter,” said Shantel. “It looks like a resort here,” she added.

When asked about his first experiences with charity, David said, “I grew up living a life of philanthropy.” David, whose father was the CEO of the JCC in St. Louis, Mo. for decades taught David the importance of giving. So, when the time came to name the aquatic center the Ferdman’s so gener­ously helped make a reality, the name was obvious to them; The Rochelle and Stanley Ferdman Family Aquatic Center.

“My wife and I are so proud of this honor our son has bestowed upon us,” Stanley said. “The honor is more than our name on a sign,” said Rochelle. “It is about the people and what this provides them for generations to come that makes us most proud.”

Just outside the gates of the Rochelle and Stanley Ferdman Family Aquatic Center, members follow the sounds of tennis balls bouncing off rackets and tennis shoes sliding on the ground as they enter the brand new, vibrant green and blue tennis courts at the brand new Hurt Family Tennis Center. 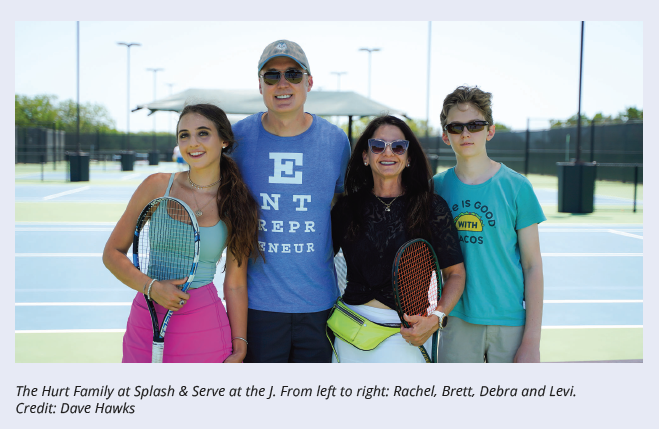 Before the Hurt Family Tennis Center opened, there were no private courts in the area for people to enjoy. Debra Hurt, an avid tennis player, had envisioned the tennis courts would be spectacular when they were complete though nothing could prepare her for just how much the community would love and appreciate them as well.

“I am overwhelmed by the enthusi­astic reactions of the members since the courts have opened,” Debra said. When Debra and Brett learned that the tennis classes filled up within one week of being announced, they were thrilled and knew that a great private tennis facility was what the community really wanted.

Brett and Debra Hurt, along with several other active members including past Generations Campaign co-chair Keith Zimmerman, were involved in the early exploration of the “Generations” Campaign project. This included visiting numerous JCC’s around the country to get member feedback on the programming and facilities, and learn what made each of them thrive in their own ways. “Tennis was at the top of the list at nearly every JCC we visited,” Brett said. “It was clear that the Jewish community enjoyed tennis, and Austin needed courts.”

As she rested on the shaded bench provided at each court, Rachel Hurt, daughter of Debra and Brett said, “Tennis gives children an outlet for a fun, family-friendly outdoor sport. I’ve been playing my whole life and I’ll play until I’m 80 just like my grandma.” Rachel currently plays varsity tennis at Westlake High School.

“It’s unbelievable how many people have come up and thanked us for donating the tennis courts to the community,” Debra said. “We are so thrilled by the excitement and energy from the community members, and to see them enjoying the courts, playing individually and as a family, is really special.” Debra and Brett truly feel like this is one donation that will last “Generations”, and this fact will always warm their hearts.

Splash & Serve marked a historic milestone for the Generations project; a vision which began long before the official groundbreaking in October 2020. Proving to be much more than a multi-purpose facility, the renovated J is a place where the community can enjoy for many generations to come.

“I am immensely proud of our team and what was accomplished,” said Shalom Austin CEO Rabbi Daniel A. Septimus. “The feedback from those who attended has been nothing other than praise. This was a big week of milestones for our organization as we celebrated the end of the programmatic and school year with the opening of our newly improved and refreshed community hall, Early Childhood Program graduation and now Splash & Serve.”

As one major milestone in the multimillion- dollar Generations Campaign was reached at Splash & Serve, more progress is set to break ground. 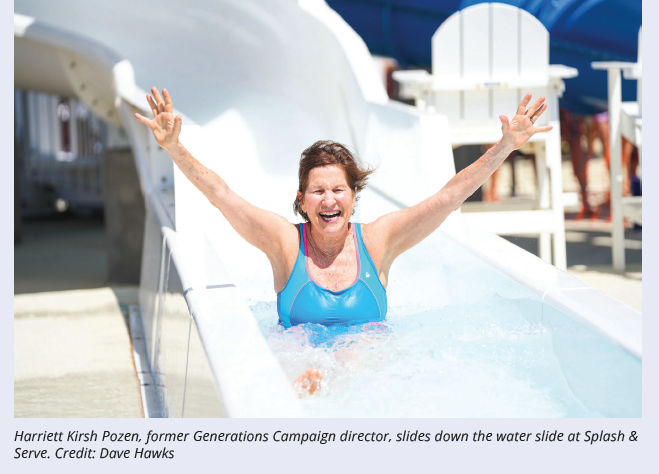 From Strength to Strength

As the Generations project process continues, the new Krasoff Jewish Family Service Building broke ground on June 21, 2022. “The Shalom Austin Jewish Family Service professional staff and leadership is thrilled to be celebrating the groundbreaking of our new home on the Dell Jewish Community Campus. Over the past two years, our staff has expanded, and we no longer fit in our current space. We are eager to be fully integrated into the campus community. JFS will continue to offer services from our current office on Jollyville, as well as virtual services, to meet the growing mental health needs in the greater Austin community. Our volunteer director

“Molly and I are proud to be part of the Generations Campaign,” said Steve Krasoff. “We are excited the new Krasoff Jewish Family Service Building will be providing expanded services to the community. Additionally, it is very gratifying that Shalom Austin JFS will now be located on the Dell Jewish Community Campus alongside other Shalom Austin community facilities.”