The ZBT Class of 1980: A Weekend to Remember | Shalom Austin 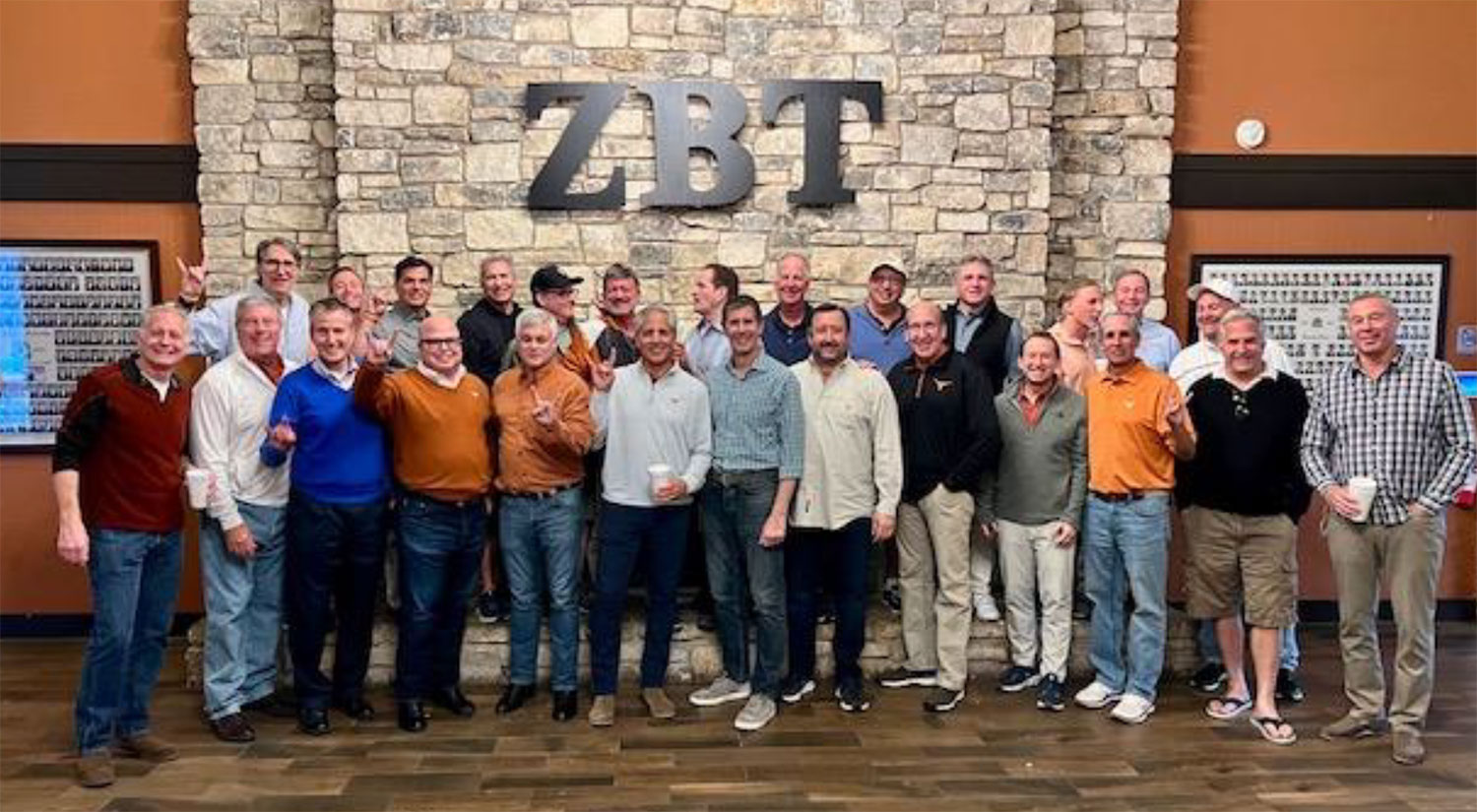 The ZBT Class of 1980: A Weekend to Remember

Whoever said, “You can never go home again?” Certainly, not Doc T or Dawg or Sparky or Hollywood. Over the weekend of November 4-7, 2021, 35 members of the 1980 Zeta Beta Tau (ZBT) pledge class at The University of Texas (UT) came together in Austin to celebrate their 40th year reunion (one year late…thanks to COVID). ZBT is the oldest and largest Jewish fraternity on the UT campus. In fact, ZBT-Texas is the number one Jewish fraternity in the country and continues to be an outstanding organization where young like-minded predominantly Jewish students from all over the country come together to enjoy brotherhood, fellowship and forge friendships that last a lifetime. The weekend together in Austin was proof that the magic of ZBT is still working.

“Forty-one years ago, we were all apprehensive young men leaving our respective homes for the first time in our lives,” said John Levy of Dallas, the group’s pledge class president in 1980. “During our freshman year, we formed a bond that lasted not only through our next three years at The University, but for over four decades.” Levy pointed out how the Jewish backgrounds they shared, the bar mitzvahs, the confirmations, the High Holiday celebrations, helped them find commonalities early on that contributed to the lifelong friendships that followed.

Now approaching their 60s, the ZBT pledge class of 1980 picked up right where they left off some 40 years ago. They drove in from Austin (across town) and Dallas and Houston and San Antonio. They flew in from Louisville and Denver and Atlanta and Birmingham and St. Louis and Los Angeles among others. They are doctors and lawyers and businessmen and stay-at-home dads. Some are already enjoying their retirement days and have the declining golf scores to prove it. They have served as school board chairs; headed Jewish non-profit development campaigns; and led community missions to Israel. Some have sons who have followed in their footsteps at both UT and ZBT as next generation Zebes. La Dor Va Dor.

For one weekend, these men sought that “fountain of youth” from their college days, shared college memories that often were embellished with the passage of time, and made new ones that left them laughing and smiling until the weekend came to an end. They called each other by old familiar nicknames that hadn’t been uttered in years. They caught each other up on personal and professional achievements, often focusing on those of their children (and even grandchildren) as they now live vicariously through the younger generation. They went on tours of the ever-expanding UT campus, shopped for Longhorn gear at the University Co-Op, jogged/walked along Town Lake, and mourned their favorite restaurants and watering holes that are no longer in business. Scratch golfers joined hackers on nicer courses than they ever imagined playing on while at school.

“The weekend surpassed all of our wildest expectations,” said Fred Herbert, a former fraternity president who planned the pledge class reunion. “It felt like we had last seen each other 40 days ago and not 40 years ago. I am so pleased that so many friends took time out of their busy schedules to come and relive such great times.” Herbert’s son graduated UT a few years ago and also was a ZBT member.

On the final evening, the ZBT pledge brothers gathered for dinner at the fraternity house, complained loudly about their favorite team’s football performance while watching the game on the big screens (that didn’t exist 40 years ago), laughed at familiar faces on the old composite pictures; bored the current fraternity members with stories of their youth, and heard updates from them that brought pride in knowing that the experiences shared and relationships forged are the same today as they were in 1980.

They remembered and said a Kaddish for their one deceased pledge brother lost too soon and whose memory will forever be for a blessing. In the spirit of Tzedakah, they collected close to $50,000 among themselves to provide a meaningful and lasting gift for the fraternity house and the current activities.

“I was entirely overwhelmed by the continued love for the fraternity as was evidenced not only by the great attendance but also by the generous donations made for a gift that will serve as a legacy of the Class of 1980,” said Todd “Doc T” Aaron of Dallas who has served as a well-respected alumni advisor for over 30 years, his father Steve was in the fraternity and is also the proud father of a ZBT alum. “No matter how much time passes, these guys will always be my best friends; actually, they will always be my brothers. And I’m proud to say that same feeling, those same bonds, resonate among the members in the house even today.”

Whoever said, “You can never go home again?” Certainly, not Gus or Goose or Scooter or Zip. And for one weekend in November, the ZBT pledge class of 1980 at UT proved that, “there are no friends like old friends.”