Courtesy of ADL
By Dulce Castañeda, ADL Austin Associate Regional Director
Each year, the ADL Center on Extremism tracks incidents of antisemitic harassment, vandalism, and assault in the United States. Since 1979, the ADL has published this information in an annual Audit of Antisemitic Incidents. ADL released the 2021 Audit in April. It tabulated 2,717 antisemitic incidents across the United States, which represents a 34% increase from the 2,026 incidents recorded in 2020 and is the highest number on record since ADL began tracking antisemitic incidents in 1979. Last year, Texas was among the six states with the highest numbers. 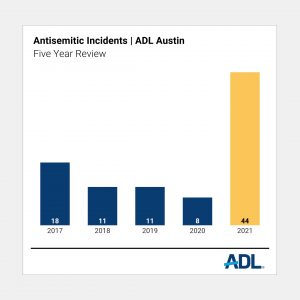 Antisemitic Incidents recorded in the Austin region also saw a large percent increase in 2021. ADL’s Center on Extremism categorizes incidents into harassment, vandalism and assault, and in the Austin region, incidents of harassment saw the largest increase by far. The 2021 audit recorded 44 incidents in Austin (compared to 8 in 2020), including 12 incidents of vandalism, 32 incidents of harassment, and no assaults in the Austin region. These figures include the rise in antisemitic activity in Austin during October through December of last year with the arson at Congregation Beth Israel, flash demonstrations by white supremacist groups, and antisemitic and white supremacist propaganda distributions in many Austin neighborhoods.
“We are always concerned about increases in antisemitism, but 2021 was a record year in Austin, and not in a good way. We saw a material increase in antisemitic incidents,” said Renee Lafair, former ADL Austin Regional Director.  “We have worked carefully with law enforcement and community partners to monitor the incidents, respond as necessary, and educate the community.”
The audit found that antisemitic incidents reached a high watermark across virtually every category. Attacks against Jewish institutions are especially concerning, given that attacks on Jewish community centers and synagogues, were up by 60 percent, incidents at K-12 schools increased 106 percent, and incidents on college campuses rose 21 percent. 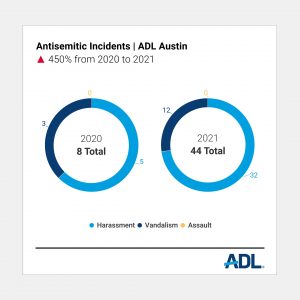 “When it comes to antisemitic activity in America, you cannot point to any single ideology or belief system, and in many cases, we simply don’t know the motivation,” said Jonathan A. Greenblatt, ADL CEO and National Director. “But we do know that Jews are experiencing more antisemitism than we have in at least 40 years, and that’s a deeply troubling indicator of larger societal fissures.”

In response to the audit, the ADL has created policy recommendations for government and for technology platforms.
Government recommendations include:
1. Speaking out against antisemitism and all forms of hate
2. Funding protections for communal institutions
3. Promoting education on hate crimes for law enforcement officials
4. Improving hate crime data collection
5. Promoting anti-bias, bullying prevention, civics education and Holocaust and genocide education programs in elementary and secondary schools
6. Protecting Democracy
7. Fighting Extremism
8. Addressing Online Antisemitism
Technology Platform recommendations include:
1. Ensuring strong policies against hate
2. Enforcing policies equitably and at scale
3. Designing to reduce the influence and impact of hate by centering the experience of
communities targeted by hate
4. Expanding tools and services for targets of harassment
5. Improving transparency and increasing oversight
The ADL also encourages individuals to take action by:
1. Speaking up and reporting an Antisemitic, Bias or Discriminatory Incident on ADL’s website.
2. Sharing facts and learning more about fighting antisemitism. ADL has a variety of resources to help individuals learn more about the root causes of antisemitism and hate and share that information with others.
3. Showing strength and registering for Never Is Now, the world’s largest annual summit on antisemitism and hate on November 10, 2022 in New York City at https://neverisnow.org/?utm_campaign=asaud20212022&utm_medium=pdf&utm_source=audit.
Additionally, with the rise in attacks against Jewish institutions, ADL recommends the following resource for institutions looking to prevent and respond to antisemitic incidents:
Responding to Antisemitic incidents: A Resource for Jewish Communities toolkit, developed in partnership with the Union for Reform Judaism at https://www.adl.org/resources/reports/responding-antisemitic-incidents-resource-jewish-communities
Find additional information and resources at https://www.adl.org/resources/report/audit-antisemitic-incidents-2021.