Burt Kunik and his wife Mary moved to Austin in 2014. A prominent endodontist, business executive and Jewish leader in Houston, the McAllen, Texas native relocated to Central Texas, to live closer to children and grandchildren.

“I met Burt for the first time at the 2014 Friends of Jewish Family Service Dinner at the JCC,” recalled Jay Rubin, former Shalom Austin CEO and current JAMen Co-Chair. “I sat down next to him, introduced myself and asked the perennial local conversation starter: ‘How long have you been living in Austin?’” One question led to another and Rubin quickly learned about Kunik’s deep attachment to Congregation Beth Yeshurun, the Conservative synagogue in the Meyerland area and one of its signature programs, “100 Jewish Men.”

Developed by Rabbi Brian Strauss and modeled after a program at the Wilshire Boulevard Temple in Los Angeles, “100 Jewish Men” featured monthly dinners with speakers dedicated to improving the lives of men “as fathers, husbands, brothers, sons and Jews through controversial thought-provoking speakers and small group discussions.”

Kunik wanted to know if something similar already existed in Austin and, if not, would there be an interest in launching a comparable group. Many meals and conversations followed as Rubin and Kunik became close friends and collaborators and began reaching out to a growing circle of interested participants.

Shalom Austin’s JAMen is open to all Jewish men in Central Texas whether affiliated with a congregation or other Jewish organization or none at all. “Burt and I viewed JAMen as an opportunity to advance Shalom Austin’s robust engagement agenda with young adults, young families and women,” Rubin continued, “by focusing on men, especially Baby Boomers, Gen Xers and older Millennials.”

Jewish demographic studies indicate that men are typically less engaged in Jewish life than women and less likely to initiate and participate in group activities. While many Jewish women’s organizations continue to flourish ranging from book clubs to advocacy groups to giving circles, Jewish men’s organizations, at best, struggle or, at worst, cease to exist.

With Burt Kunik as Founder and Chair, the first JAMen Dinner and Speakers Forum took place on October 14, 2015 and attracted 100 members right from the start. Four years later, on the cusp of Season 5, JAMen had 180 members with a goal of reaching 200 by the end of the year. Then, in March 2020, the pandemic hit and JAMen, like so many other programs, went full stop.“We didn’t want to transition to a Zoom model,” Kunik recalled. “We couldn’t replicate the informal person-to-person contact with the speakers and each other or the conviviality and connection of eating and drinking together. We also didn’t expect the pandemic would last two plus years.”

What accounts for the program’s past track record of success? For some, JAMen offered the opportunity to reconnect or stay connected with old friends as time marches on and Austin undergoes dramatic change. For others, especially the high number of newcomers relocating to Central Texas, JAMen presented the opportunity to schmooze, network and make new friends and contacts. For leaders of Shalom Austin, congregations and other community organizations, JAMen created new opportunities to connect with current, former or potential members, donors or participants. For everyone attending, JAMen presented a not to be missed opportunity for great food and drink, catch up conversations and highly stimulating speakers.

Past presenters have included a top-notch mix of local, national and international thought leaders from the rabbinate to academia, from sports to music, from business to journalism, left, right and everything in between.

Although nearly everything else is going up in price these days, JAMen Season 6 remains at the same 2019 price of $100 for basic members and $150 for sustaining members.

“We’re thrilled to be back after a two-year hiatus and are looking forward to seeing so many of our past members return and to welcoming lots of new participants,” Kunik commented. “We’re also super-excited to convene our outstanding programs and dinners in the beautifully refreshed JCC Epstein Family Community Hall/ Gloria and Harvey Evans Performance Hall with a top shelf state-of-the-art audio-visual system and our new catering partners at Congregation Agudas Achim, Rachel Rosenberg O’Brien, Executive Director and Vikki Bowen, Catering and Kitchen Manager. We also plan to invite retired CAA Chef John Sutton as our special guest to one of our Season 6 programs to appropriately thank him for his five years of service,” Kunik shared. 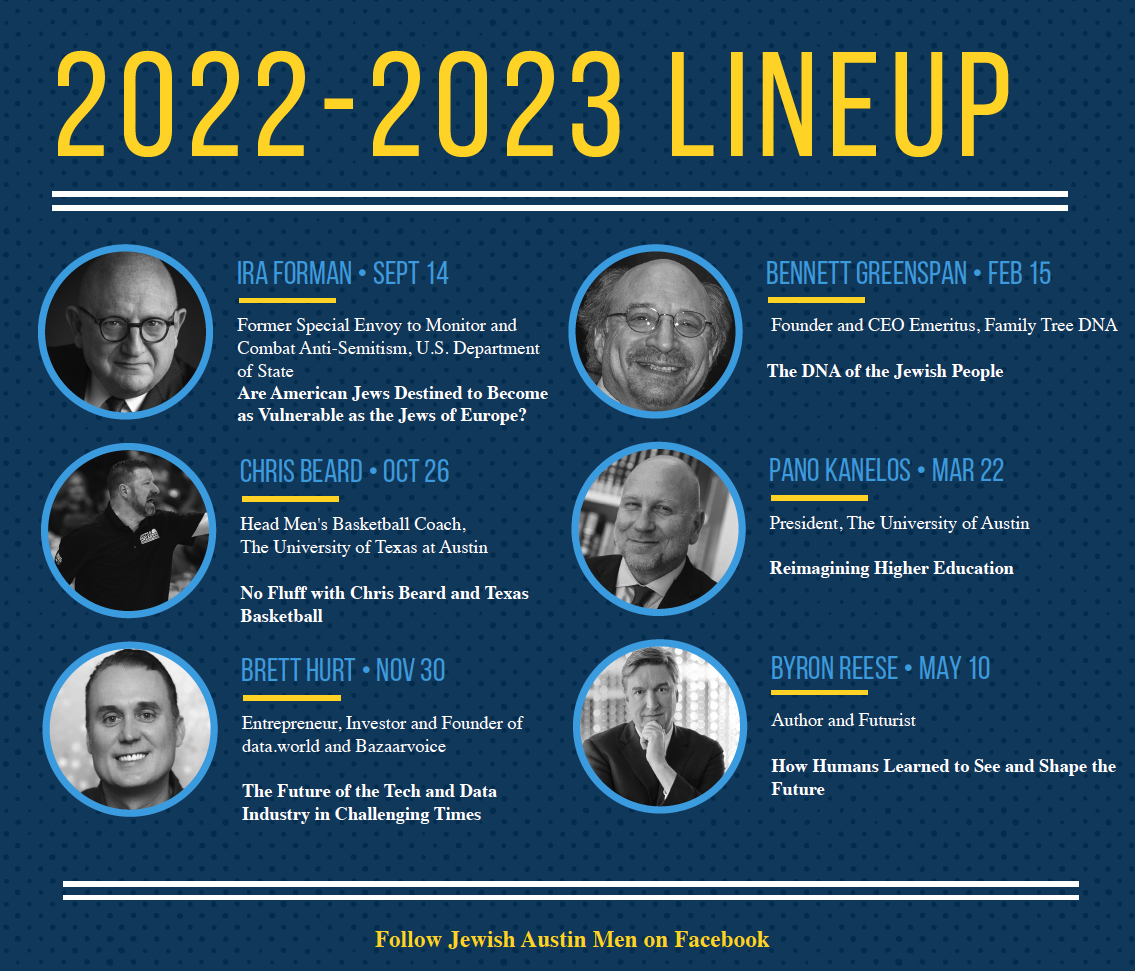