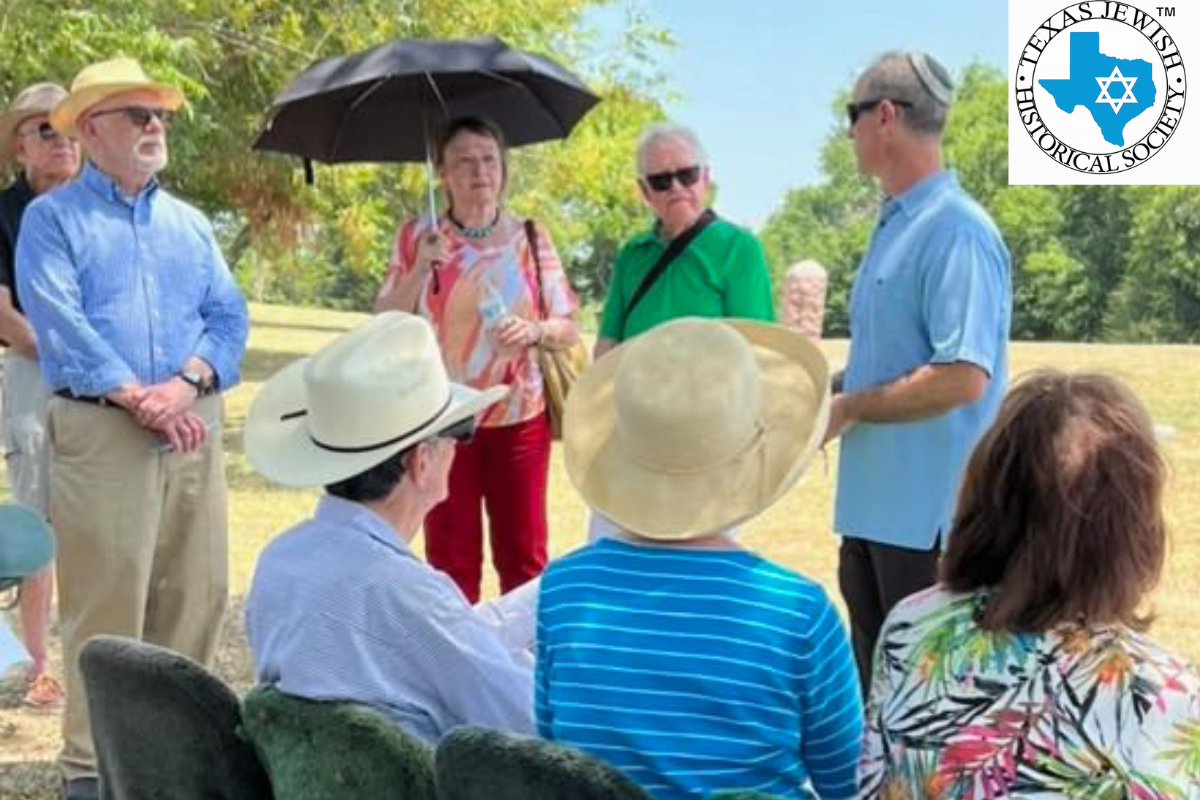 In Bonham, Texas, TJHS held its quarterly board meeting on July 15-17, 2022. At the conclusion of the meeting, members of the organization and several Bonham residents gathered at Willow Wild Cemetery to consecrate the section designated as the Jewish Cemetery of Bonham. Newly placed cornerstones mark the area. The service involved prayers, reading scripture and walking around the perimeter of the Jewish section of the cemetery seven times. The number seven represents completion, just as the world was created in seven days. Avi Mitzner, of Congregation Shearith Israel in Dallas, Texas conducted the service. At the board meeting, TJHS voted in favor of a $5,000 grant to begin the restoration of the burial sites.

This was the first in-person meeting of TJHS in two and a half years because of COVID. In addition, many members participated in the meeting by Zoom, marking the first successful hybrid meeting of the society.

Attendees in Bonham were treated to a tour of the Sam Rayburn Home and heard a lecture by Emma Trent, coordinator of the Sam Rayburn Library and Museum. Malinda Allison of the Fannin County Museum spoke about Jewish businessmen and their families who lived in Bonham. Lou Ashmore talked about the history of the Jewish cemetery and plans for its long-term restoration.

At the board meeting, it was announced that the James and Rosalie Alexander trust had bequeathed a $100,000 gift to TJHS. President Sheldon Lippman will ask the executive council to make recommendations on how best to use the money such as establishing a scholarship program.

Membership chairman Marc Wormser reported that 25 new members have joined TJHS this year, bringing the total membership to 502. Archivist Sally Drayer said that several documents were sent to the Briscoe Center on the UT Camps in Austin, along with two scrapbooks containing photos and comments about Texas Jewish War Veterans. Past President Davie Lou Solka reported that the Briscoe Center is open but social distancing remains in effect.

Efforts are being made to digitize several TJHS documents. A long-time volunteer at the center Kimberly Dietz, who has performed many administrative tasks for TJHS, is retiring and a replacement is needed.

Davie Lou, who edits the TJHS News Magazine, is looking for stories about Jews who immigrated to the US in the 1970s and 80s. She encouraged members and magazine readers to seek out Jewish residents in their communities and get their stories.

John Campbell informed members that the TJHS website is being updated to include online membership registration and dues payments.

Vickie Vogel, chair of the travel committee, announced that a trip to Poland is being planned for May 2023. Registration is available at www.txjhs.org. The TJHS fall quarterly meeting is scheduled for Sunday, October 16, 2022 on Zoom.